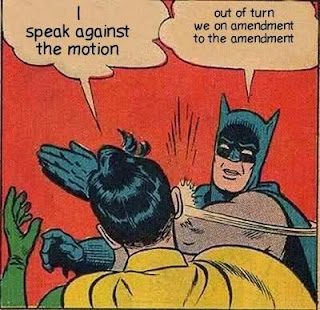 Over the weekend, I experienced my first time being a delegate at the Alberta Teachers Association's (ATA) Annual Representative Assembly (ARA) which has around 450 delegates in attendance.

The meeting started at 9:00 am on Saturday and went until around 10:30 pm Sunday night, with various breaks for snacks, lunch and dinner.

Here is what I learned at this meeting:


1) Everyone in attendance truly cares about the profession of teaching


Through various debates and discussion I witnessed, first hand that dedication towards teachers and our profession.

It was quite a sight to see.

We debated motions such as whether or not to research the problems females face in the profession, had an extensive debate around our budget, and my favorite motion was "Urging the government to place a moratorium on Gr. 3 SLAs until the profession's concerns have been addressed".


2) Level 145 of Candy Crush is quite difficult


During the assembly, there were many times the discussion had little to no relevance to my local, and therefore gave me time to do some research around an upcoming motion.  I do have to admit that I did try to beat level 145 of Candy Crush and I failed miserably. Consequently, I went back to researching upcoming motions.


If you agree with the intent of a motion but may not like the exact details you are free (provided another person seconds you) to amend the motion.  That means you can alter the wording, in almost any way, to your liking.  Now.  INCEPTION TIME,....if someone doesn't like your wording they can (also provided they have a seconder) amend your amendment.  That is right, you will then have to vote on the amendment to the amendment, then on the amendment, and then..wait for it..on the motion.  Therefore, there could be some deep long discussion around one single motion.  Which brings me to.....


This is a great alternative to discussion.  During the debate you might find yourself hearing the same arguments over and over and over and over and over again from different people and therefore any delegate can "Call to question".  Which essentially means "I have heard enough and now lets vote".  Of course 2/3 of the assembly have to be in favor, and if so, the discussion stops and you vote.

This motion, I found out first hand, will result in some delegates congratulating you, but also results in some angry text messages and criticism around "shutting down democracy".  In the end, I deleted the text messages and was happy to move on!


Over the discussion, I found that many times my ADHD went through the roof.  At first, I thought I could keep myself occupied by clicking the pen they provided us with.  10 seconds later, my colleague confiscated the pen and provided me with a package of nibs. Well those nibs kept my attention at bay.  On a separate note, after consuming all that sugar, coincidentally I found myself shaking my leg constantly an hour later and being asked to sit in the back alone.

Overall, the experience was one which cannot be replicated and something I hope every teacher experiences at least once.  As I stated at the start, the overall theme that kept reoccurring over the course of each day was "We are the ATA, and we truly care about the quality of education in our province".
Posted by Dave Martin No comments: